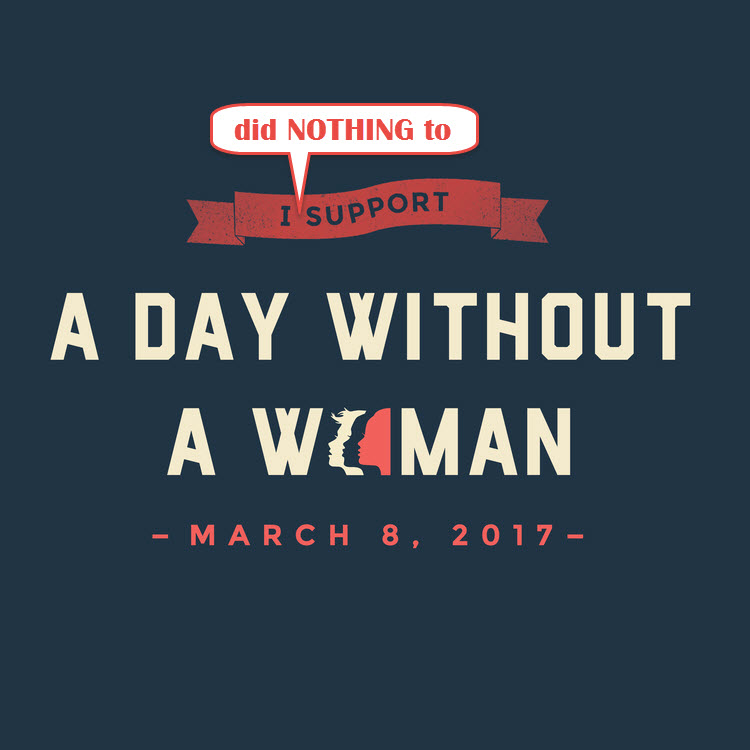 Congratulations feminist “activists” – hijacking International Women’s Day for your political objective was a resounding flop. I mean on an epic scale. The floppiest flop to every have flopped. The 1980’s called, they want their floppies (discs) back.

From my limited vantage point (my social media feed, TV news coverage, and personal interaction) I saw absolutely no change or effect from this supposed massive strike designed to bring the world crashing to its knees because of the lack of women in the workforce. Zero. Zip. Nada.

NO ONE WAS AFFECTED

Oh sure some of you wore red in solidarity – that took real guts and showed them who’s boss. (Oh, and because women need another excuse to wear red. Can you see my eyes rolling?)

But what really happened, was that every single woman in my news feed went to work and conducted business without even a hitch to her giddyup and without any ill effect to her male counterparts, or to her immediate circle, or to the world at large. I didn’t see a single post in my feed from any woman who did NOT go to work. In fact, I saw LOTS of women hash-tagging #adaywithoutwomen” furiously while making their excuses as to why they had to, or needed to, (or best yet) why it was a “defiant” move to, ACTUALLY GO TO WORK. As incredulous as it seems, they purposefully hash-tagged #adaywithoutwomen in the same post telling the world they were working. LOTS of them too; not just one or two FB friends. My FB feed was FULL of these posts. I didn’t hear a peep on the news about how soooo many businesses were negatively impacted by the day’s strike to the point of begging their women workforce to come back and never leave them again. Or about how the men in their lives just melted into puddles of tears over the realization that they can’t live without a woman for a day. I just saw lots of media coverage, emoji high fives, and lip service, but NO REAL PROTESTING and NO REAL EFFECT.

WHAT IN THE WORLD….??? Have y’all lost sight of what “protesting” is? In reality I mean. Ho hum, I guess we live in a virtual world now and protesting can be done from our safe, virtual platform, sipping our Starbucks without any need to get uncomfortable, or sacrifice something, or just freakin’ DO anything.

Did you see the episode of Portlandia in which the characters were posting about protesting and then finally decided to actually protest something but they got so caught up in the act of preparing that they didn’t end up doing anything? Oh do watch it, it’s an hilarious and spot-on commentary about yesterday’s non-event:

In light of women’s ineptitude at following through on a simple concept of striking to “show-the-world-that-women-are-such-massive-contributors-to-society-that-society-can’t-function-without-them-for-just-one-day”, I propose that MEN strike for a day. What if, ALL men, ALL OVER THE WORLD, just stopped doing everything and anything for a whole day? Think about THAT! #adaywithoutmen

At least half, if not a significantly higher percentage, of our mechanics (got car trouble?), plumbers (pipes sprung a leak?), firefighters (house on fire?), police officers (domestic assault?), security officers (need someone to walk you to your car in a sketchy parking garage?), doctors (headed to the ER?), pilots (flying home for a dying loved one?) and on and on and on, are MEN. I think a true strike by men would be a reality check for all women who like to pretend they are strong, empowered, warriors, blah, blah, blah and don’t need no stinkin’ men in their lives.

But the truth is, women can be all those things (strong, empowered, warriors, and more) AND need men too.

Can we just admit we need EACH OTHER and celebrate EVERYONE, EVERYDAY? How much better could we make this world if we focused on encouraging all the people we meet in a day – regardless of their gender and regardless of past damage done to us by a particular person of a particular gender. Instead of an “I’ll show you what it’s like without me” mentality, we could show the world by example what incredible contributions we are making by stepping up our game. We could all (regardless of gender) inspire others to be their best because we choose to always be OUR best – even (or especially) in the face of adversity! And in case you haven’t learned yet, forgiveness is a powerful tool and can be a motivation for change – in ourselves and in others.

The future starts NOW. Let’s go out there and be good examples and positive role models for everyone.

And if a protest IS in order, by God, get off your ass and actually protest.